Not being one who wants to die with lots of toys, I selected these products from the reviews and with the intention to try things out. This iPad Air* was a gift to my Father from my sister. My job was to outfit the iPad Air* for him. 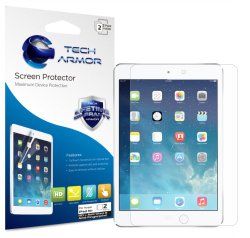 My Father had used the iPad Air without the screen protector for 1 week before I installed this film for him.

Installation was pretty easy for me. I started by watching all the installation videos Tech Armor provided on their site. I did not install it in the bathroom as suggestion by some. I suggest you find a clutter-free area and remove dusts in the area as much as you can.

Once you have it positioned, the film lays itself down nicely. I used the sticker they provided the remove the dust particles. Do remember some might be stuck on the film rather than the screen. 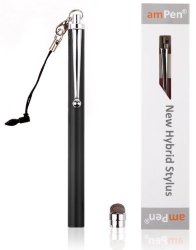 I bought both amPen Hybrid Stylus and amPen Capacitive Stylus.

For older folks’ viewing pleasure, this adapter can be hooked up to a TV with HDMI inputs. Whatever you see on the iPad will show up on the TV screen, control still comes from the iPad.

I’ve heard that, for this, it’s better to get an Apple made part. For what he needs, Apple TV was not necessary.

You will also need a HDMI cable to go between the Lightning Digital AV Adapter and the TV’s HDMI input.

Be sure to measure the length you need before selecting the cable.